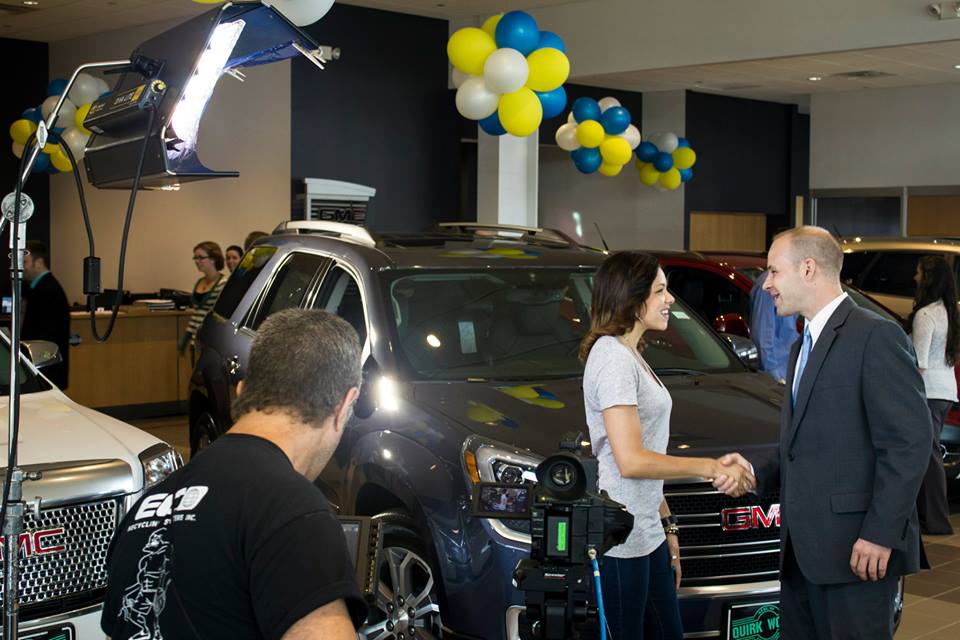 Advanced Lighting at Quirk of Manchester

It was a long day of filming at multiple car dealerships. There are many factors that affect how long a shoot can take.

One of the most underestimated aspects is lighting. Not many people know how to light a scene professionally and it can make all the difference when producing a great television commercial. An often unexpected problem on the set is when there is too much light or unwanted light. In one of the first shots of the day, the sun was shining very strongly on a GMC truck. The Sound and Vision Media team knew that they had to cut down on the glare and reflections coming off the brand new shiny truck. They threw up a flag (film speak for a large piece of black cloth) on a c-stand to cast a shadow on some of the more reflective parts of the truck. This created a better image. Inside the dealership the crew noticed many ceiling lights were reflecting in a car’s windshield. It was determined that the lights would be very distracting to the viewer. Director of photography, Matt Thurber, working with Director, Mark Helms, jumped on a ladder and blocked out the lights quickly with black gaffer tape. You have to use a lot of different techniques and improvisation to get lighting down just right. Especially when you are shooting in an environment that wasn’t designed for filming. On the last shot of the day we were trying to dolly down a line of cars but we were running into the same problem as earlier in the day. The light from the sun was shining too strongly off the glossed hoods of the new cars.

We sat patiently waiting for a cloud to come and block out the sun.

Lighting is a difficult aspect of video production and here at Sound and Vision media of Boston, we do everything in our power to make sure your video project is lit perfectly.